This book will be launched at the National Sporting Library, Middleburg, Virginia, on Sunday, November 8 at 2:00 pm. Author Martha Wolfe will speak and sign books.

Review by Martha A. Woodham The Great Hound Match of 1905: Alexander Henry Higginson, Harry Worcester Smith, and the Rise of Virginia Hunt Country by Martha Wolfe, Lyons Press, 2015, Hardcover, 224 pages, $22.95Before Virginia became the epicenter of foxhunting in the United States, two men staged a contest to determine which was hound was better suited for hunting in America—the heavy, biddable English hound or the ill-mannered American hound that ran like a screaming banshee.
[s2If !current_user_can(access_s2member_level1)]
To read more, click here to subscribe or if you are already a subscriber, please log in!
[/s2If]

[s2If current_user_can(access_s2member_level1)]
In The Great Hound Match of 1905: Alexander Henry Higginson, Harry Worcester Smith, and the Rise of Virginia Hunt Country, author Martha Wolfe sets a fictionalized version of this competition against the history of foxhunting in Virginia. She has written a wonderful account of the battle between two wealthy men—Higginson and Smith—with egos to match their fortunes, each adamant that his hounds were the best.

Set in an optimistic America just recovering from the 1893 depression, the match was very much a stuffy Old World versus the brash New. Against this background, Wolfe gives us a portrait of the vastly different men—Higginson, the gentlemanly foxhunter, and Smith, who liked his hounds intuitive, impulsive, independent, and to show “initiative…like any full-blooded American.” According to the author, “Smith and his [Grafton] hounds were mongrels—bold, forward, and independent to a fault. Higginson and his [Middlesex] hounds were the refined, reserved elite—passively aggressive, methodical, accustomed to queuing, happy in a crowd of equals.” A. Henry Higginson, MFH. Nowhere were their differences more apparent than in their hunting styles. “The Great Hound Match was, if anything, a fight between two men who came down on opposites sides of a formula each had written in his own mind for the most successful method of hunting a fox,” writes Wolfe.  Should the huntsman guide his hounds, as was the English method, or should the huntsman let his hounds guide him?

With the match as the setting, Wolfe uses every other chapter to explore the how and why of fox hunting. Twice a John H. Daniels Fellow at the National Sporting Library and a published author, she applied her research skills to uncover fascinating details about the Great Hound Match of 1905 and about our sport.  She compares hound types and how they were bred to hunt their home territories efficiently. She delves into the intricacies of scent; of the fox in literature and the reasons for his many nicknames; and of how Northern industrialists discovered Virginia hunt country, arriving with boxcars full of horses, tack and hounds. The most important thing Smith ever did for the sport, she writes, was to found the Masters of Foxhounds Association, removing the governance of foxhunting from the auspices of the National Steeplechase and Hunt Association.

The famous match took place in the days when daring women rode sidesaddle as they negotiated fearsome fences. Wolfe quotes foxhunter Alice Hayes, who wrote in 1903 that the difference between men and women in the field wasn’t the horse or their nerve—it was the tack, what Hayes called the “tyranny of the sidesaddle.” While men rode the horse, women—labeled Amazones—rode the saddle, having to balance perfectly. “Think of it as the Ginger Rogers school of equitation,” writes Wolfe, reminding us that Rogers danced as well as Fred Astaire, only backwards and in high heels.

The hound match was big news in 1905, covered by all the newspapers of the day. Twenty-six hunts were represented on the first outing. The Richmond Times-Dispatch had a reporter on horseback, official Clerk of the Match Allen Potts, whose accounts give us an intimate view of the spectacle—the hard miles covered, the rider falls and injuries, the cleverness of the prey, the kills (only one, an illegally bagged fox). As Wolfe points out, this was war: “Seek, find, blood and death.” 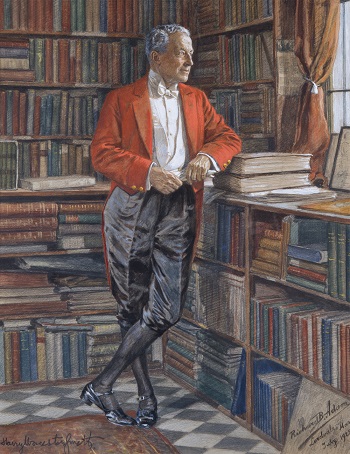 Harry Worcester SmithSmith, wily like his hounds, graciously offered Higginson the first day of hunting. Not only had he been roading his hounds as he scouted the Middleburg territory in the days before Higginson and his hounds arrived, he know the first day would be dry and windy.  After about three hours of drawing blank coverts, Higginson gathered his hounds and called it a day. But the field had enjoyed a nice trail ride with lots of jumping.

Day Two was not much better. Smith’s hounds, which had to be coupled so they would not run off, ran off as soon as they were uncoupled. Smith had no sign of them for two hours, finally catching up with the rogues when he heard them howling as if they had taken a fox. But since no one had seen the hounds put a fox to ground, the judges could not award them the day. Another blank.

And so it went for two weeks of hunting, the frustrated hunters spending hours in the saddle, galloping many miles across the countryside. Both packs found and chased foxes, but there were no kills, the ultimate proof of the best pack. After twelve days of challenging hunting, the judges declared a winner (but you will have to read it for yourself.  I’m not giving it away.).

In the end, the foxes were the true winners, outsmarting the hounds and the men who hunted them.

“If one [fox], just one had let himself be legitimately killed by either the Middlesex or the Grafton hounds, so much of history would have been changed,” writes Wolfe. “That martyred fox would have either crowned the English hound as the foxhound of the universe or would have made it clear once and for all, that there is an American foxhound and that it rules America. Since no civic-minded fox stepped forward and since the decision of the judges was somewhat subjective, the question—which is better for America, the American or the English foxhound?—has never really been answered.”

Indeed, the debate has continued among hound men to this day. In the years since the Great Hound Match, foxhunters have tried to settle the issue by reenacting the competition in Virginia. The first, in 1989, was snowed out.  But in 1991, the match had a clear winner: the legendary Ben Hardaway and his pack of biddable American/English Crossbred hounds.